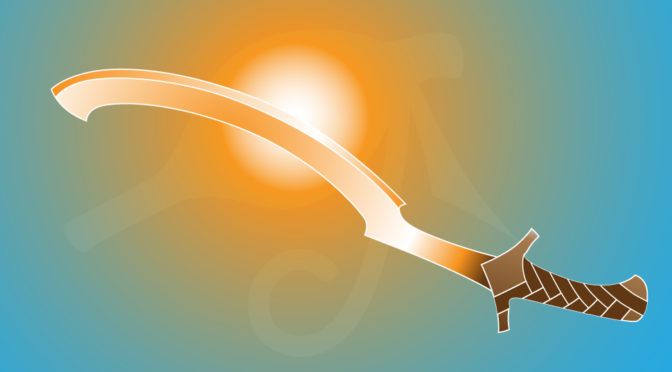 I’m really proud of The Bloody-Handed Name of Bronze. It’s the best roleplaying game I’ve ever designed and I think that I’ll be able to look back and see its publication as a watershed moment for the playable parts of my creative output. This is where it came from.

In April of 2015, 48 hours before I was to leave for PAX East, I was stricken with the madness particular to my kind: the need to write and publish a new game that had absolutely nothing to do with the project that I was working on; a project that was, of course, mired in the difficult, final stages of completion.

When, two days later, I drove over to pick up Hannah Shaffer and Evan Rowland from their home to make the drive to Boston, I stopped off to pick up a box of 100 copies of the completed (though admittedly first-playable-draft quality) game, spontaneously titled Lover of Jet & Gold.

The game design, of course, hadn’t taken just 48 hours. It had started with a conversation online, probably on The Forge, most likely somewhere around 2008. In the conversation, an individual had said that she couldn’t stand the idea of using dice to determine the outcome of important moments of a roleplaying game; that it was fine to use dice when the outcome didn’t really matter, but that an unlucky roll should never determine the final fate of a character.

imagine a game in which you are a magician. You can make a deal with the dæmons of the world, like literally trapping lightning in a bottle. You can command the lightning to do your will, and it becomes stronger every time you do, gaining a die. But the lightning resents being captured

I said, imagining a game, “OK, imagine a game in which you are a magician. You can make a deal with the dæmons of the world, like literally trapping lightning in a bottle. You can command the lightning to do your will, and it becomes stronger every time you do, gaining a die. But the lightning resents being captured, and when the sum of the 1s it rolls is greater than the rating for your control over it, it breaks free and treats you as any suddenly free slave would treat the one who had restrained it until they could overpower their slavedriver.”

She said, “I want to play that game.”

I agreed that I did, too. But it wasn’t the focus of my creative endeavor at that moment, as I was in the early stages of developing Beowulf.

I was also experiencing some frustration that Vincent Baker would resolve as he worked on Apocalypse World. He had just published In a Wicked Age… at that point, and despite his hopes for it (and despite one particular mechanic, the Oracles, capturing the imagination of the game design community), it had some serious flaws — flaws that already existed in Shock: and flaws I replicated when I refocused it on Beowulf. While mechanics could directly affect outcomes (often only tenuously connecting them to the events that took place in the process), the fictional situation in which your characters lived had little input into the mechanics, severing fictional causes from effects. The result was a clumsy, abstract connection between the players’ imagination and the processes of play, which is bad news for an RPG design. It was a problem common in story games at the time, but we both recognized it as something that reduced viscerality.

On the other hand, I loved how a player could go about coercing another (the reason I’d wanted to use it for Beowulf in the first place). I’ve been wanting to convert its coerceion to my purpose: the critique of the narrative of “heroism” that defines both Fascist ideology and post-9/11 Conservative political rhetoric.

Vincent was able to address the disconnection of imagination and procedure with Apocalypse World, and then Epidiah Ravachol was able to address the same issue in a different way with his nanogames, What Is a Roleplaying Game?, and particularly its focus, Vast & Starlit. I started thinking hard, as well, about how all the play in Spaceteam is in the social space between players, and how Dixit and its spinoff, Mysterium, treat communication between players as the true arena of play. Not the dice or stats or resources, but the conversation itself. The score of the game is judging how well you are communicating your vision.

So once I started writing Lover of Jet & Gold, I had some ideas about how I wanted the game to work: play must take place in the negotiation between players. One’s task is to take on the interests of either your namedealer — one who can speak the secret Language of Names spoken by every entity with will, from the rising sun to an ancient rock, worn to sentience by the weather, to a town guard who desires greater position — or the interests of those entities as they emerge into the chain of events in play.

The function of the rules is to give a reason to lie, and thereby a reason to tell the truth and have it doubted. It’s about debt and trust, and about the distrust that civilizations have for those whose resources are their knowledge and skill.

And it worked! The best strategy is to play your character’s will sincerely. When you get a name (say, the town guard Basha; or Antshemut, the Northern Storm of Flashing Fire) to agree to something, the best play is to play out the interaction. It’s literally in your best interest to roleplay it, to make it vivid. Otherwise, the player who controls it will get to revoke their support, or even permanently wound or kill the character because they so much as feel like it.

Not long after, I decided that I wanted to put the “sword” in “Sword & Sorcery” and began working on a similar system for culture heroes. Where Lover of Jet & Gold was about the Avraham and Mosheh, Thetis and Casandra, Heart of Bronze was to be about Samson, Achilles, and Gilgamesh. In many ways, the rules are the same, turned inside-out. The names of the world resent the power of these mighty mortals and, while the immortal Great Names need their fated heroes to remind the world of their Greatness, they also fear the mortals overcoming them, deposing them in the waters of the underworld.

Honing its Edge Until Its Name Was “Sharpness”

Some playtesting revealed a few issues. Heart of Bronze had a pretty serious problem, where, because I was using rules inspired by the Illiad and its like, a character could rape another into loving them. It was an emergent behavior of the rules, but since all the pieces were there, it laid out a strategy that I didn’t want to be viable. I redesigned the “Follow a Passion” rule a bit and added a rule that gives power to your consent (or lack thereof) that hands the outcome (good or ill) to the recipient of the passion.

There was a much more mild issue with Lover of Jet & Gold, which was that one of the forms of actions you could take, “Negotiate”, was really a reference to an outcome, not an action. I changed it to “Make an Offer”.

I also had a new experience: pride in a bug! It stemmed from this series of features:

That cascade of effects can often spell the death of a character who’s been patiently awaiting their turn simply because the player in question hasn’t had a chance to play enough.

The answer was simple: acknowledge that the game works for 2-4 players. 2p mode has its own rules, but 5p poses some severe challenges to the basic game design. I might eventually hit on a rule that makes it possible, but right now, the cap is clearly 4 players.

I combined the results of those edits into the “apocrypha” volume, The Name of Bronze. You can download the games and play them, if you like. They’re poorly edited and very much playtest quality, but you can see some of the process there.

For the last several months, I’ve been playtesting the game and refining it further, including settling on its name The Bloody-Handed Name of Bronze. There’s now a 3000-word version that I edited together for Eppy’s Worlds Without Master zine, but I may find that I have to publish it before he’s ready to birth his next issue.

I’m really happy with the way the game works. It places all tactics in the realm of interplayer communication and trust. It encourages imagination. It works best when namedealers dig deep into their powers to mitigate their weaknesses that they might escape their web of promises, and it works best when heroes paint the world red, hoping to arrive in the waters of the underworld with such a splash that the Great Names fear their arrival.

2 thoughts on “How The Bloody-Handed Name of Bronze Works”