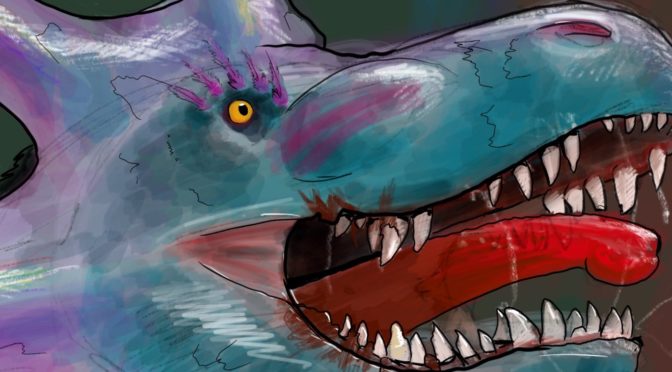 Our vision of dinosaurs keep getting more and more weird. I’m not claiming any particular accuracy here, but I’m pointing out just how little we know, and how speculation like that in All Yesterdays can be a powerful tool to help us get our heads around just how weird the universe is. 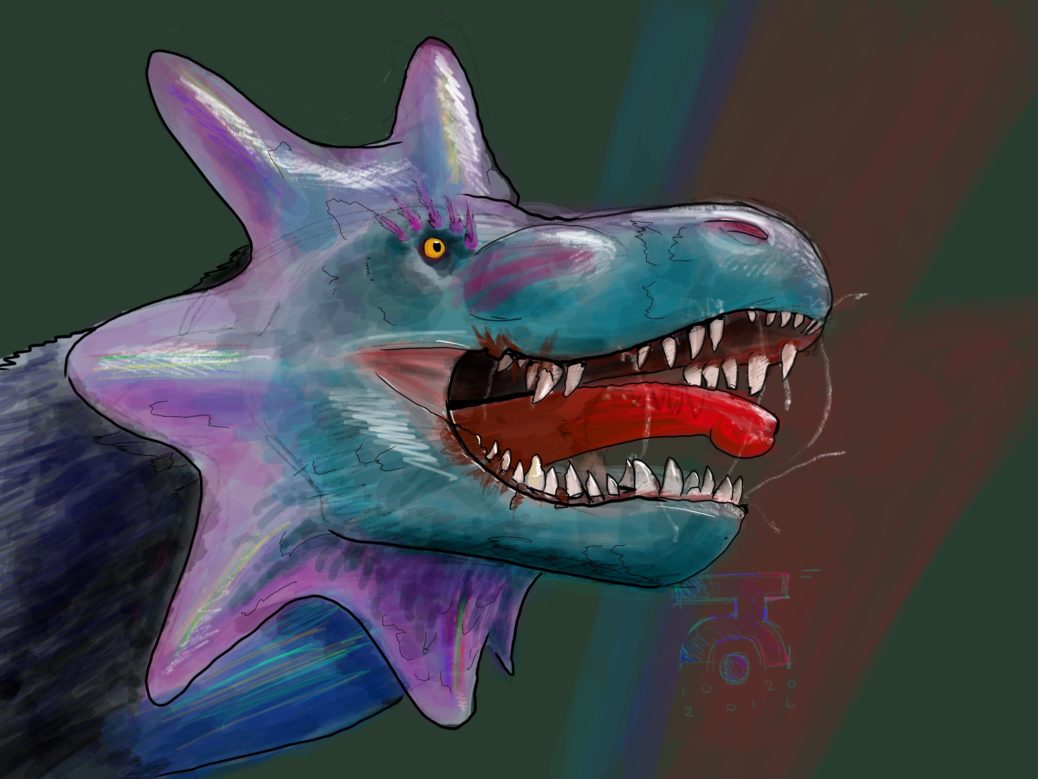 This is a Tyrannosaurus Rex whom I’ve named Ziggy. He wants to find a female real bad.

The inspiration for Ziggy comes from a couple of places. The first is this XKCD: 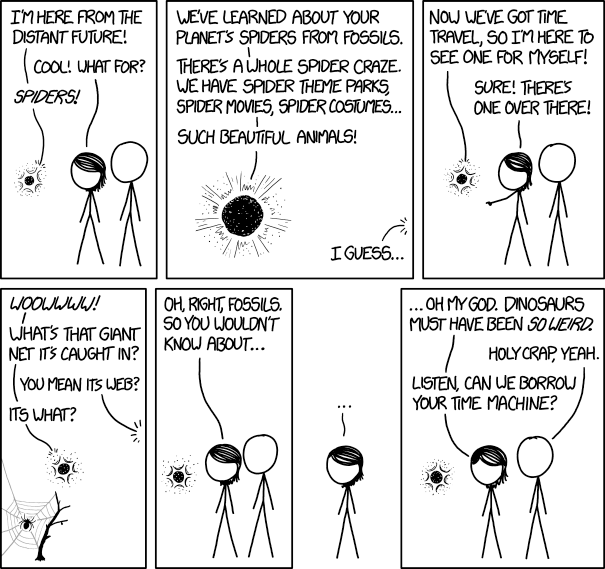 The next is this post by science fiction author Andrea Phillips:

Wait someone draw me a t-rex with a feather display worthy of Carnival in Rio https://t.co/Jj3Kk7xFbQ

…which is, of course, replying to my agoggery at this article:

…which is backed up by this Scientific American article, my reading of which followed my enthusiastic viewing of this video:

In Which I Speculate Wildly

The bumps we can see on the skull are the subtlest hint at what’s going on here: they’re just the spots covered in iridescent pink fuzz. The Tyrannosaurus Rex’s smaller ancestors had big bone crests, but scaling them up over evolutionary time, they big-and-Bonnie’s became too high a metabolic cost. Instead, they developed elaborate feathers and behaviors to attract a mate.

Like many birds, the males do all this showy stuff to attract a mate when they’re in heat. In the case of the hummingbirds, above, the male makes their face look like a flower — something of acute interest to a female hummingbird. I have to wonder if she leaves at the end of the video not out of disinterest, but because the male made her hungry and she takes off to go get a snack.

In the case of the Tyrannosaurus, it’s just the flashy motion, not the flowerliness, that attracts a female. To enhance the effect, it also inflates its nasal cavities around the fenestræ in its skull.

But that’s just to make eye contact across the dance floor. The totally grotty layout of Tyrannosaur teeth that would have gotten them stuffed with rotting meat. Since they, like most predators, were always on the lookout for meat that wasn’t going to fight back (or at least wasn’t going to fight back hard), smelling like you died yesterday is inherently attractive. Because he’s in high heat, Ziggy here has followed his instincts and gotten his teeth positively crammed with carrion.

But, of course, better than rotting meat is wounded meat that can’t get away. To entice the female closer during mating season, Ziggy’s tongue is engorged with blood, even expressing through the skin. He thrashes the tongue like a dying animal, twitching about in a way irresistible (he hopes) to females.

He’s capping off his performance here with his mating call, a whooping, trilling song coming from his massive, but still birdlike, syrinx.

I’m pretty sure Ziggy’s the kind of male who sends unsolicited pictures of his cloaca to females, though, so things might not work out for him.

You like this kinda stuff? Help me make more by backing my Patreon!