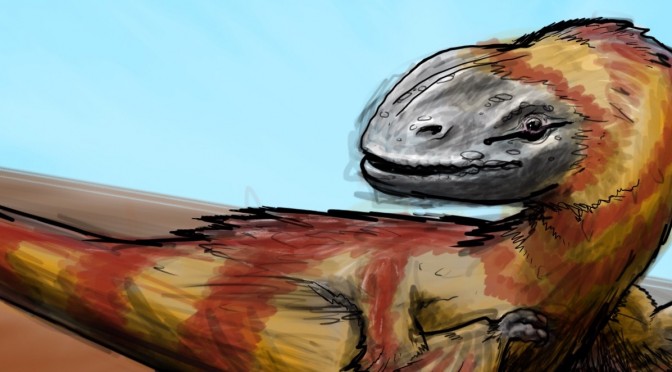 Any traveller will recognize that the first sounds and smells of a town are those of the settlement’s ktesh. The birds stand only as tall as the knee, but, as the saying goes, “All cities are built of the bones of the ktesh.” They hunt as a flock, consuming the rats, mice, and toka of a settlement and, in return, the people of the settlement consume the flesh of the ktesh. The color of its feathers never fade and are used for spectacular artworks, and its bones are read by namedealers to read portents of the future.

The meat has a bolder flavor than that of any other bird, but is both more delicate and more abundant than that of sheep or goats. It bears well the spices that travel the Great Road and combines well with eggplant and garlic. In most cities, it can be purchased, heavily salted and spiced, grilled on sticks.

Ktesh are raised from eggs by ktesh-keepers, who select individuals as they grow toward maturity, choosing those that cause the most trouble for the flock for the spit first before they mature. Males, though smaller than the females, begin to fight with others in the flock when they reach full size, so most are eaten before they grown too large. A select few are allowed to reach maturity to mate with the larger flock of females.

Among many peoples, ktesh-keepers deliberately raise ktesh to maturity, training them to fight. Because they fight only until their opponent flees the arena, most fights are among males. However, the females, larger and stronger, will often kill their opponents and consumer their flesh. Such a fight is often the culmination of an evening of ktesh fights, and the killing claw of particularly powerful combatants is kept as a talisman after the death of such ktesh heroes.

1 thought on “The Ktesh: Delicious but Deadly”