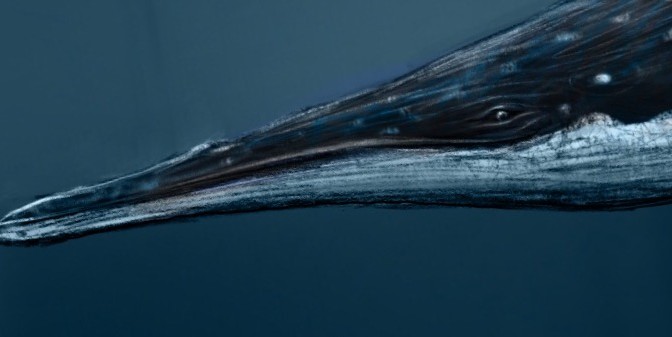 The Tokarahia is a small (about 6m long), extinct ancestor of the modern baleen whales. It has a few, probably vestigial, peg teeth in the front of its jaws, but the rest of its mouth was almost certainly filled in with baleen. I love its sleek shape.

I’ve done some speculation here, of course. (That’s why I do these!) We know the Tokarahia from only a few skulls and bits of rib cage and fin, but we can guess that it, like its ancestors and modern whales, had vestigial legs. I can’t quite figure out if we know just how vestigial they were on Tokarahia, so I’ve represented them as largely-fleshy, flat structures, shaped a bit like the fins of a squid, though incapable of independent movement. I hope there was at least something there! Otherwise, it’s not as weird.

Often, aquatic animals that live near the surface of the water (as it seems these did) are light-colored on the bottom and dark-colored on the top to camouflage against the sparkling, deep sea from above and the bright sky from below, so I’m speculating that it has that kind of basic pattern. Additionally, I’ve given it the whale shark’s speckles on top. Tokarahia’s relatively small brain implies that it wasn’t particularly social, so, instead of the orca’s eye spot in the front (which probably aids them in recognizing each other), it has an eye spot on the back to confuse and discourage its own predators.

The pectoral fin shape doesn’t seem to be well known, although we have a few bones. I’m guessing that they’re just a little more foot-like than modern whale’s fins, but still definitely fins.

*I pretty much used their work like a coloring book.

Much of my reconstruction here is based on* the work of Robert Boessenecker and Chris Gaskin. Thanks for doing the hard work for me!

Wanna read more about the Tokaharia? This is a pretty good article!

I’d like to thank my Patreon backers for helping me make stuff. You can, too! You’ll get lots of process insights, ePub-friendly issues to read at the beach, and special goodies when I do other projects!

Thanks in particular to Jason Godesky’s The Fifth World RPG and its shared world! I’m going to have to do a review sometime. It’s the only science fiction RPG I’m excited about right now.