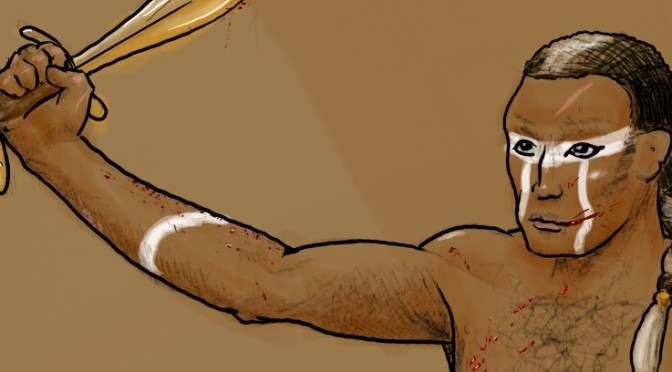 Nur Amegh is the champion of the City of Guruk, which can be found in the Three-River Mountains far the the west of the center of the world.

The City of Guruk has a longstanding tradition of telling the future in the deaths of its gladiators. Each match is observed closely by oracles who tell from the splashes of blood whether the Queen may conceive this year; from the cries of pain of a victor whether the Northerners may raid again; from the pattern of intestines on the ground whether the barley might rise early.

Amegh is a character I expect to play in my upcoming game, The Bloody-Handed Name of Bronze, to appear in the pages of Worlds Without Master soon. I hope he’s fated to be the hero of his people. I’m pretty confident that, if not, he’ll at least go down fighting.

The city’s four gladiatorial families, fecund with adopted former slaves, grant the arena their purported offspring at each festival. Nur Amegh of the Family of Nur stands for three years now the champion of the Guruk. To aid in the foretelling of good fortune for the family of Nur, Amegh fights with the bronze, double-leaf-bladed weapon, the Wind that Blows Both ways. He will, if the oracles decree it necessary, supplement the weapon with others, but it is the Wind that Blows Both Ways that finds its home in his palm and in the breast of his opponents.

In his dreams, and with the tongue of his trainer Nur Geshur, the ancient voice of the Sun of the Sky of the City of Guruk lends him purpose. It drives him to a truth written in blood — a truth that ever further glorifies the future of those who believe they own him.

Around his waist he wears the mocking, grimacing Face of the Sky , the harness of the champion of the city.

But Amegh has interests beyond those best sought in the arena.

Nur Amegh wouldn’t exist if it weren’t for my Patrons. You can be one, too! He arrives on these pages with mind bent to a bloody road to freedom with the help of The Fifth World, the shared, post-Collapse world of Jason Godesky.

2 thoughts on “Nur Amegh, Holy Gladiator of the City of Guruk”