A Year ago, the village of Pa woke to a site none had ever seen. Arriving with the rising sun was the enormous beast they called Mountain-That-Walks. Clinging to its gold-adorned fur was a stranger coated in white clay who would only call herself Chalk Woman. 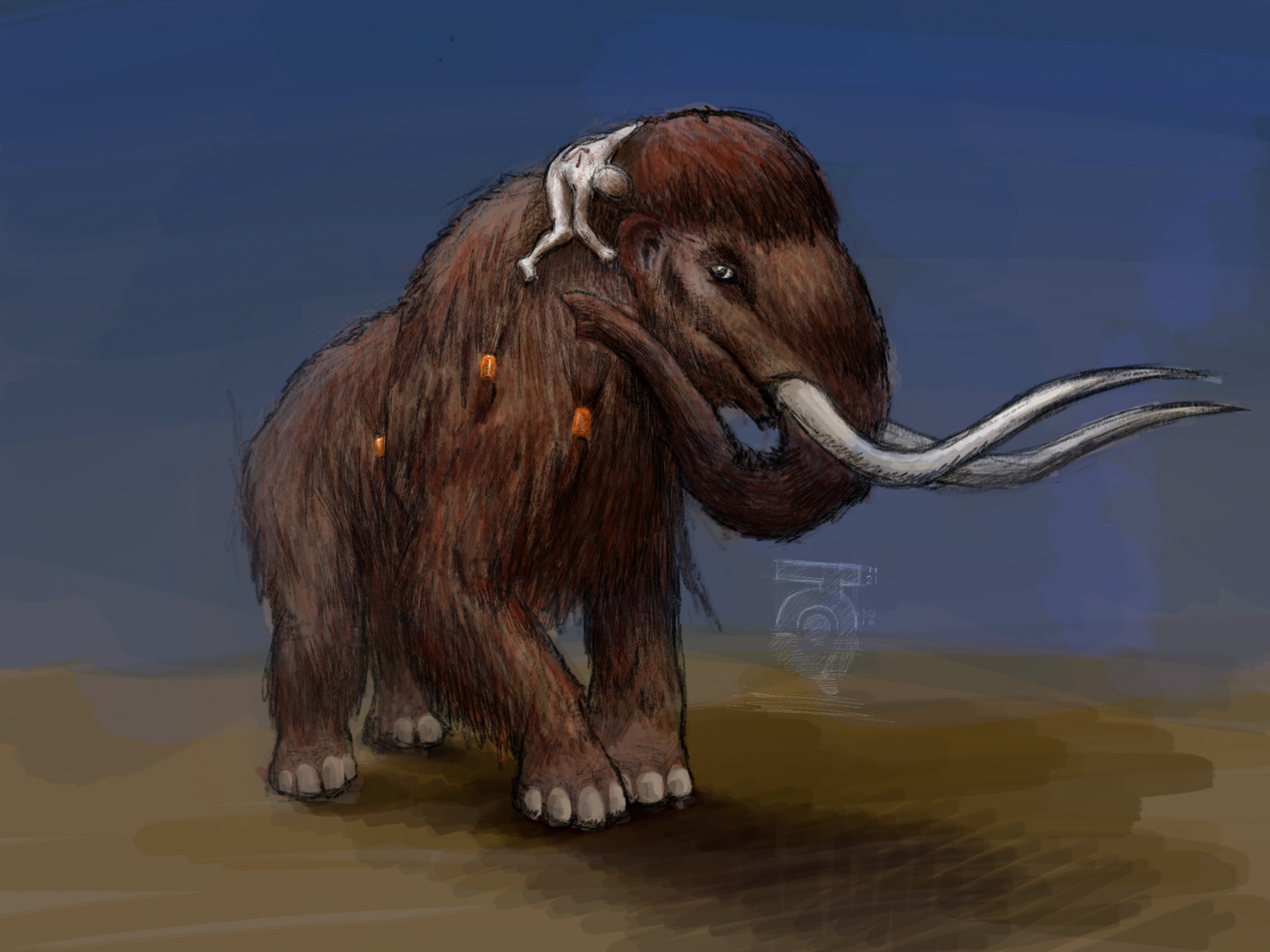 The villagers of Pa, desperate for help, fed the two until their stores were exhausted, for the last of their granaries had been stripped bare by raiders supplying the Grand Imperial Army of Gilag, across the hills to the north. The year’s barley harvest was nearly due, and when it came ripe, so would the time of the return of the raiders. The villagers explained this to them and plead the pair for help.

The two — one, an enormous, shambling beast of fur and tusk, the other tiny and dessicated — conferred for many hours through the day until Chalk Woman said, in a voice as cracked as the clay that covered her skin, “Yes.”

She lowered herself from the back of her ancient teacher to the ground, to the very soil in which the barley dried, its green now turned to gold. She caressed each head of grain and whispered words to it heard by none. She listened to it, though it made no sound but that of the gentle, drying harvest breeze.

She prostrated herself in the soil, smearing it on her face and filling her mouth. When it was moist, she drew it out and wrote on her skin among the many words written there in the Language of Names.

The moon had not yet completed its closing when the raiders arrived: two dozen, armed with iron and mounted on fearsome akum, arrived with flourish and confidence over the nearby hills to discover the fearsome Mountain-That-Walks with his tiny, ghost-like student sitting high.

“You will leave, never to return, or you will die here,” croaked Woman of Chalk.

In response, one of the raiders drew back an arrow and released it. It pierced the eye of Mountain-Who-Walks who shuddered, but did not move.

The leader of the raiders, in high-plumed helmet, bearing an axe of iron and a spear of bronze, shouted, “I am Udag-Atash hero of a hundred battles. I have seen your like and found you weak of limb and fast only in retreat. Yield and we will take you prisoner. Resist and this village will die.”

Woman of Chalk did not stir, but for her calm breath that ruffled the fur of Mountain-That-Walks.

Angered, Udag-Atash dismounted, but no sooner did his foot touch the ground than the soil reached up and swallowed him whole without a sound, like a pebble dropped in a pond.

The raiders, taken aback, tried to calm their akum, and one found their courage and stepped forward, sinking into the soil as though the ground gave no resistance. The shrieks of akum and rider merged until they were gagged with soil, and were drawn under.

The remaining raiders’ eyes grew large in their helmets and, as one, they turned and fled at a leaping gallop over the hills.

The threat gone, Mountain-That-Walks shook, then knelt. For days, Chalk Woman would not leave his side as he weakened and died.

To this day, the barley that grows on that spot brings great strength to the people of the village of Pa.

Woman of Chalk departed, she said, lest those who pursued her descend on the village. She never returned, though the people of Pa say that she fled to the sky after her death, a constellation in the night sky, first visible at the harvest.

The Mountain-That-Walks and Woman of Chalk only exist because of my Patreon patrons. Back me up and help me create more!