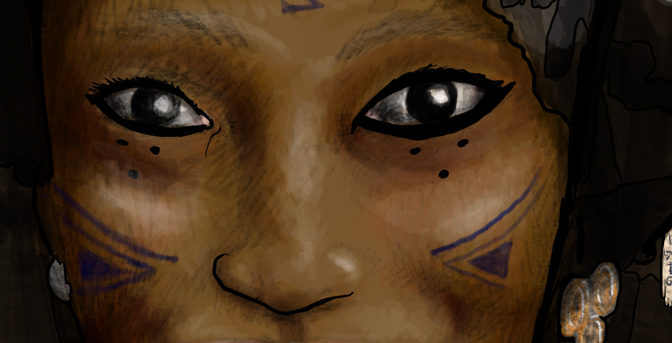 Ahuj, as she’s known by Captain Kwajr’s brave crew, is friend to Djafaiya, the East Wind of the Sea. At a word from her lips, city gates discharge their duty to her by opening. Fair winds vacate the sails of their quarry and swell their own to overtake their prey. The Mighty City of Po invites her with gritted teeth and will see her unharmed in its rough streets and halls of intrigue.

She was borne by the great namedealer of the People of Hab, Iiyetueh — Iiyetueh, about whose traveling student you have read in this very library. The few who knew both are scattered to the winds, to turn the interests of the names of the world to their own or die at the whim of those they would control.

Captain Kwajr, Fury of the East Wind, holds Ahuj in high esteem and relies on her relations to the mighty names of the world. But she has, in return, promised to never constrain Ahuj’s freedom, and thus far has always returned from errands dictated by her own heart.