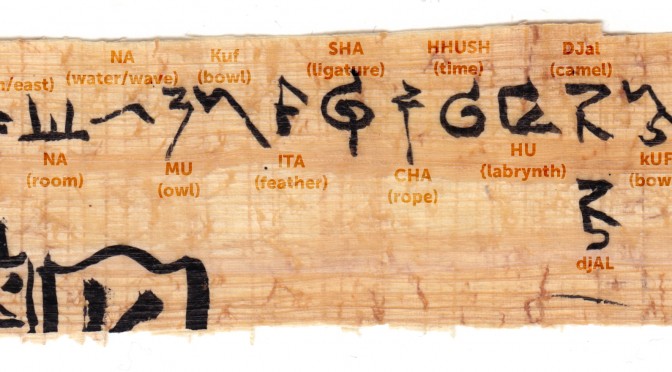 Namedealers across the known world write and speak in the Language of Names, first taught to Ummapesh by Tsahuat during her first death.

At the top, you can see an abcdario, to be read (in this case) from right to left. Writing can go in any direction, but long texts are usually written boustrophedon — back and forth (as in the example below, the last three lines on the right, where the writer ran out of room for the sentence).

Because many letters contain several consonants, each can carry under it a small circle or cedille-like character (like the bottom of a French ç) that means “the other consonant”.

All but two vowels are represented as diacritics, as you can see on the lower right of the abcdario. One of them, “iy”, has two forms: The longer is for the end of a word, and derives from a hieroglyph that means “note”. Vowels are typically left out when the name of the letter includes the vowel. The writer relies on context and the reader’s literacy to inform the reader if they should pronounce the entire name of the letter, only its first consonant, or consonant and vowel.

This transliteration uses “ch” to represent a voiceless pharyngeal fricative, as in the first sound in “chutzpah”. The “HH” is an unvoiced, epiglottal fricative (as you find in many dialects of Arabic.)

Lady Gudamu’s contract, above, is interesting as a warning to those who might deal in names. While she can read, she has just learned to write and is not fluent in the Language of Names. She makes several mistakes, most notably, in her nervousness, she makes a mistake in the lower right, blotting out a misspelled blessing — an act of namedealing it itself.

Hail! We treat with our true names! Great river Iunugetstat of the East, deal with me! Drown the king Hachun that my child may marry his and I promise to you that he will as your own, to be great! Praise, praise!

The king did, indeed, drown immediately thereafter. But, having fulfilled its end of the bargain, it also drowned Gudamu’s child for striking her misspelling of the word “godeh”, “great”. Instead, she herself rose to power and ruled the city of Dacheg for twenty years, instituting the Festival of the River that we hear of today, with its boat jousting contests and feats of waterborne acrobatics.

Linguistic note: Namedealers (and others who fancy themselves as such) use this phonetic alphabet along with illustrations, particularly with hieroglyphic forms. Each letter carries a literal meaning, as well as the sounds from the Language of Names, and few namedealers know the entire lexicography of hieroglyphs.

You can see the influence of several languages in this system. The consonant “r” is the second sound of the word “ura”, which means it often gets the “second sound” diacritic, but since there’s another “u” character, it’s just as often left out.

You can see several aesthetic influences, as well. Some characters are drawn in simple, rigid lines, implying that they originated as carving in stone or wood, while others, like “HHUSH”, “time”, or “DAT”, “hand”, can most easily be written with a brush or pen.

If you want more like this from me, give me your support by backing me at patreon.com/joshua!