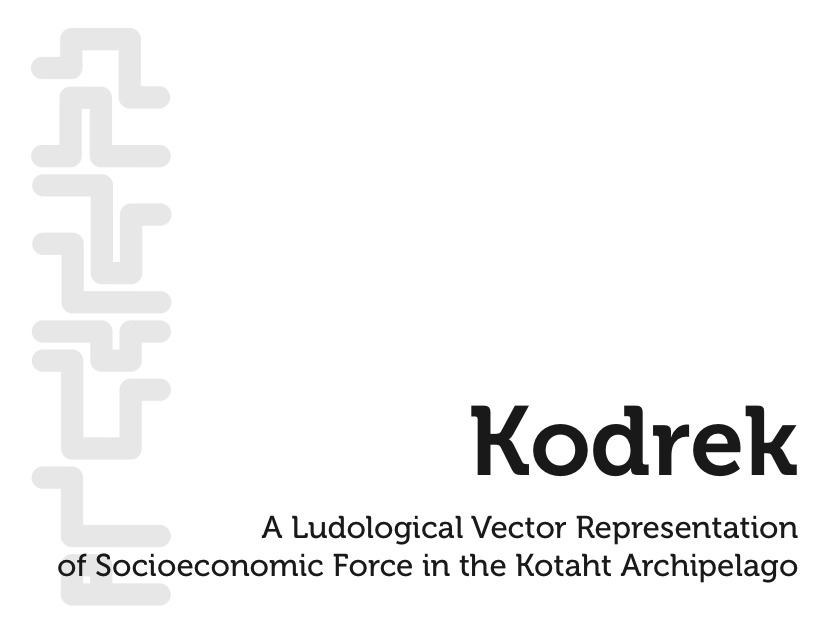 The 1.0 rules of Kodrek are complete! I’ll be sending boards out to all the Kodrek-level Kickstarter backers just as soon as printing is complete.

The timing means that I’ll also be entering the game in the 1000 Year Game Challenge. It’s got some stiff competition!

Kodrek is a game with a funny background. It comes from an actual game of Human Contact. Because HC is about cultures and their expressions in contrast with other cultures, we needed a game that summed up the part of the culture we were soaking in during a particular scene. In this case, it was an Academic (a bit of a dick, that guy) who was gambling. Now, keep in mind, the Academy doesn’t have money; its members trade in ideas because of their post-scarcity environment. So the guy was gambling with money that he was manufacturing. But he considered all the marines and pirates around him murderers, so he figured it all came out it the wash.

My specification was that it be a three-way game with shifting alliances. Vincent wanted it to be a game where you committed to plans in secret and then revealed them to each other, then dealt with the consequences. You can actually see the scene in Human Contact on page 84. We described the triangular board, the move-slapping, and that was about it.

After the game, Rob had to go home and Vincent and I went for a walk. We kept going back to the board game idea and rough-sketched play. I’ve thought about it for a few months and have come up with these final rules.

The game has a lot of variables and the rules discuss some of the things you might do differently if you lived with a different clan. I look forward to seeing the variants that players come up with!

I’m considering publishing the game. For the time being, it’s

though I might loosen it up a little bit, allowing commerical products and derivatives once I’ve decided.