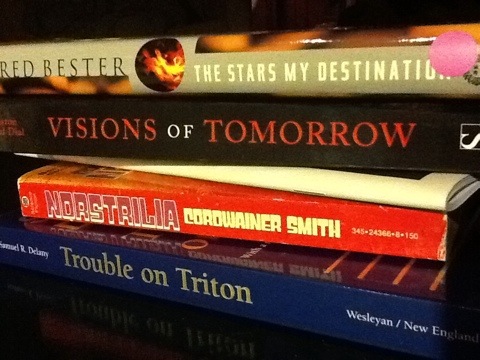 Readercon is fucking rad. It’s a four-day literary science fiction convention in Burlington, MA (I didn’t know there was a Burlington in Massachusetts, either!), up route 128 where Autodesk and Adobe live. It’s the sun of the solar system of events that take place in Corey Doctrow’s Eastern Standard Tribe. It’s a miserable land of industrial parks and highway exits and I can’t wait to go back next year.

Carrie and I went together, not knowing exactly what we’d find. For me, it was sort of a fact-finding mission. I wanted to know if they were my people; the kind of people who think about the differences between Philip K. Dick and Bruce Sterling, not just as authors with bodies of work, but as what they have to say about the societies they live in. Panel after panel — only a one-hour break for dinner, people — was about gender, empire, race, sexuality, and the human central nervous system. I stayed each day until my brain was full, but much of Saturday night was spent in the company of other science fiction authors, drinking beer, talking about ideas. I got to shake a couple of very famous hands and am very excited to explore some new fiction.

I also got to play a game of Orange Book Shock: for the first time in a year or something. Ish and Greg picked me out of the crowd with their own copy of the book and we squeezed in a couple of hours to spin a weird little yarn about passenger pigeons that were hypnotized to carry memes through a New York City post-memetic apocalypse. Greg’s protagonist, Bill, was the last independent pigeon man in the city, while Comcast had consumed the entire Empire State Building, turning it into an enormous rookery. He was convinced that his last independent opposition, Phil, had the cure to the plague that was killing all the pigeons. Phil knew for certain that the plague wasn’t real, but was using Bill’s fear to get him to sell out to Phil. In the end, they used their memetic tricks on each other until they both believed that the pigeon plague could only be tamed by getting a regular treatment from the Empire State Building. The plague, of course, was a memetic one for humans — there was no disease, just a communication-controlling corporation that wanted a couple of putative indies around to do their memetic dirty work.

As you’d hope from these things, I came back charged up to read and write. I have a shiny newly-signed copy of Trouble on Triton by Samuel R. “Chip” Delaney, who’s a much weirder and more fun person than I imagined. I’ve also got a copy of Visions of Tomorrow: Science Fiction Predictions that Came True, edited and signed by Thomas A. Easton and Judith K. Dial, which is good fun. Along the way, I picked up a copy of Norstrilia, by Cordwainer Smith, which is his lone novel, the rest of his corpus being in the form of short stories and articles on psychological warfare for the CIA.

The biggest takeaway, though, was my immediate, stammering, giggling fanhood of Vandana Singh. After a panel on the place of colonialism in science fiction (rooted as it is in the imperial age and tales of trips to foreign and savage lands), I ran up to the dais and gushed at her. I’m so pleased that it didn’t put her off. I asked if I could give her a copy of Human Contact, and bless her astounding dignity, she asked if I would sign it for her.

I’ve got one of her books on Kindle now and another coming in the mail. Tonight’s my first change to sit down and read it. That her work is at the top of this rarified reading pile is a testament to how much she moved me with her incisive thought and warm, vivid prose.

I’m hoping I get to participate in the con next year. I’m nervous about asking them as though I was asking the whole con on a date.

1 thought on “Readercon is how I wish all conventions were”