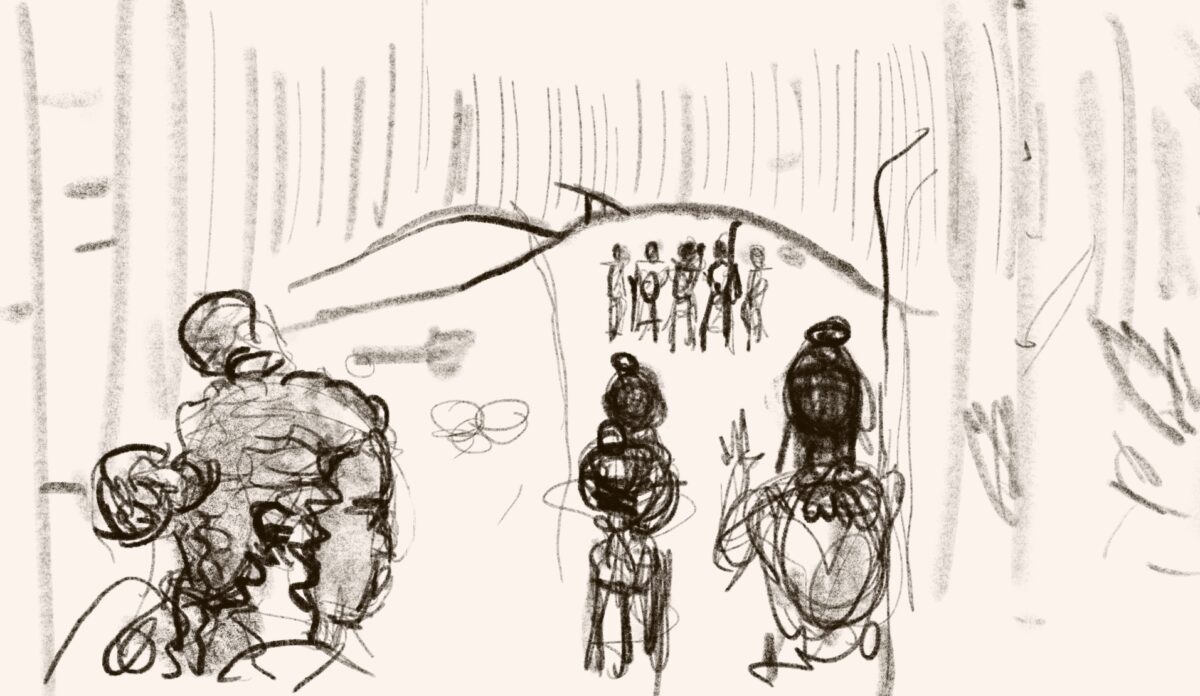 First through the door of the Libarrow comes the toughguy who went in, carrying his club. Then comes he who I assume is the Lord, his face painted with the thunderbolt and Radiactive. He wears rings of glass on each finger but the pointer of his right hand, which carries a ring of gold. The finger on which it rides is short and scarred. He wears a codpiece made of carved wood that looks like a deer dick. He carries a club that I hope to never see used in anger — long as he is tall, headed with fine-ground stone, hafted with delicately graven Maina wood. It looks like it has pictures in relief on it. I would love to take the time to record them. They’re in a spiral, so they’re probably a story. The lines on his face tell me has lived perhaps 100 hurricanes.

He stops and looks at us. As we’d thought, more of the Hoarders appear soundlessly from the tight bamboo outside the ring of trees. More toughguys, armed better than us, fat and healthy.

Once the Lord has sized us up, he steps toward us from the door and from the inside come three people, two wearing shifts of glass-beaded net. As ancient as the garments must be, the people wearing them are young, only recently able to bear, fat like the toughguys, but moving as though they were in a practiced, shuffling dance, unable to meet our eyes. Their hair is braided to make a veil before their eyes and it, too, had glass beads woven into it. They stood behind the Lord and stood quietly, gazing downward.
Behind them come six more, but their differences to the others surprise Jerone, who looked at me to confirm that I saw. Skinny. Dirty. Tired. Sad. Their skin shows dry salt though a generous well was in arm’s reach. Lacking even a loincloth, they gaze downward that of a beaten dog.

“I am Lord Golden. What tribute do you bring?”

I scrambled to think of a good reply and was relieved when Jerone spoke first.

“We tend this place as its Libarrians,” says Jerone, their voice steady and meaty, “and we welcome you to it. We can share with you its secrets.”
Lord Golden coughs a laugh. “I was here first. I found it. Why should I let you in?”

Jerone makes a face like both a frown and a smile. “Because we will make it worth it to you,” they say.

Lord Golden appraises the eight of us. Healthy, but not fat like Lord Golden or his entourage; but neither emaciated and broken like his slaves.

“Prove it,” says Lord Golden. One of his toughguys chuckles like he thinks it sounds like a clever thing to say.

Jerone responds, “Yeh, okay, what shall we call your people?”

Lord Golden stands up even straighter and inhales deeply before reciting “We are the Free People of the North, who Bow to None! We will Break the Rope of Death with Our Will!”

We respectfully let the words reverberate for a moment, before I recite, “We are the People of the Red Wood, the Lion Tamers, We who Know and Remember, We Who Tell All who Ask, We Who can Make Words Stay and Bring Memories Back from the Dead.”

“Huh,” says Lord Golden. “My shaman has died.” One of the sullen-eyed behind Lord Golden shuffles their feet sadly. “Do for me as our shaman did and I will allow your presence.”

“Thank you Lord Golden,” says Jerone, “We are pleased to show you all the secrets of this place.”

Every one of the eight of us released a breath at the same time.

Musha shows them what the books are. Says, “Point at a line.” The Lord Golden points at a spot on a page. Musha whispers into his ear, “Whisk sesame oil, soy sauce, vinegar, sugar, chili oil, and ginger together in a small bowl; stir into jellyfish and marinate while you sing Nanana Baddalabia twice.” Now, here, take the book, go over to Steppan and point to the same spot.” Musha steps away and Lord Golden holds out the book, his truncated finger pointing at the same spot.

Steppan looks at it, then whispers in Lord Golden’s ear. Confusion runs across Golden’s features, then suspicion. “So you know how to cook jellyfish? That is what your people do?”

“No, says Musha, “Now whisper in my ear something no one else knows.”
Lord Golden, no less suspicious, whispers into Musha’s ear, “When I was a child, I ate a green spider and it made my mouth burn. It is the source of my strength.”

Musha knods, transcribing it to a scrap of paper already covered in practice letters. Musha folds the paper so only the one sentence remaines visible, then hands it to Lord Golden. She says, “Now hand this to Steppan.”
Lord Golden walkes to Steppan and hands him the paper. He looks at it, nods, looks Lord Golden in the eye and said to him “When you were a child, you ate a green spider and it made your mouth burn. It is the source of your strength.”

Lord Golden’s eyes grew round. “How do you know this?” he demanded.