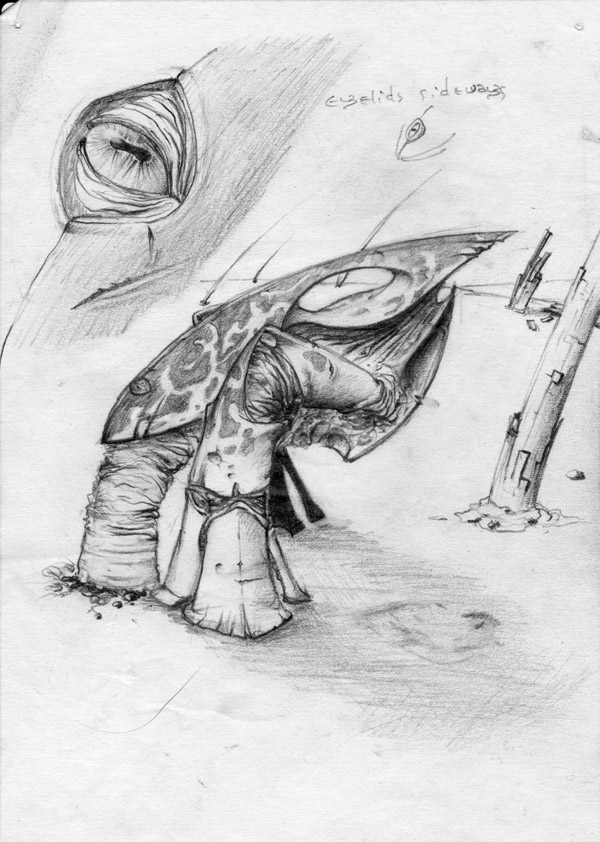 I just found this while looking through old illustrations for materials for Human Contact. It’s not related, but I remember being really proud of this drawing. The original’s about 4″ tall.

If I recall, the deal is that these guys are herd animals, but their herds stretch really far apart. They stay in communication with natural radio that run along the top of their bodies inside their carapaces. They’re not naturally highly intelligent, but because of their distributed observational standpoint, have a complex communication system for predicting the weather on the barren, storm-ridden surface of their planet. As herbivores, they spend most of their time snuffling through the soil for little fungus-things, but they occasionally gobble up a little animal that secretes a toxin that has psychoactive effects on the enormous creatures. This pushes their nervous system into full-fledged creative intelligence, which they can only participate in when they’re large enough to not be poisoned by the toxin. Children are therefore little herds, incapable of creative thought. Only adolescence brings creativity.

They have a single eye, but it’s evolved to give them a limited form of depth perception.

They also have started realizing that, if they all point their antennae up, they hear some really weird stuff.