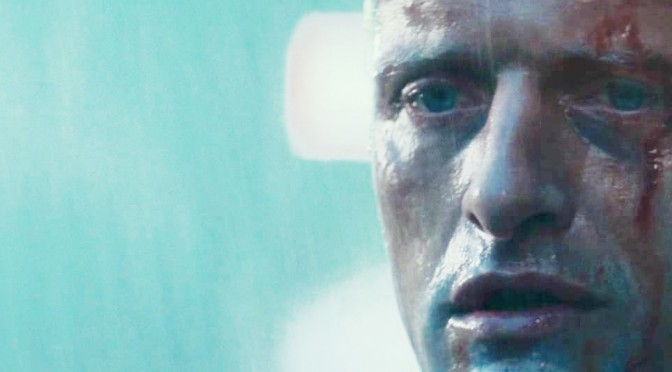 Blade Runner is a near-perfect vision. What I love most about it is its willingness to embrace the Noir idiom, not just in its visuals, but in the ambivalent moral position of its protagonist, Roy Batty.

I find its rare mistakes downright encouraging to me as a creator; if the entire creative team can accidentally, but explicitly, miscount the number of characters in the story, then I can live with that typo in MFØ.

We’re gonna skip talking about Deckard right now, because while he’s our point of view over the course of the movie, he’s not a protagonist; it’s not his decisions that impact the course of events, it’s Roy’s decisions. It’s not his actions that precipitate the events, those are Roy’s, Zhora’s, Pris’, and maybe Leon’s (though none of them seem to have any better a relationship to him than tolerance, and I suspect he’s there as a compromise.) And it’s not Deckard’s actions that make the moral statement that the movie leads up to: that’s Roy’s, again.

We know that he was activated today, January 8th, 2016. Four years from now is January 8th, 2020. But the movie takes place some three months earlier than that. Roy, like everyone else who’s ever lived, doesn’t actually know when he’s going to die. The information he wants so badly doesn’t exist. He’s a living thing, subject to the vagaries of life.

But he’s not going to go down without a fight. Roy, the actual detective in the movie, roots out every piece of information he can possibly uncover in order to assemble the brutal narrative of his short life into one that leaves him with a sense of meaning. But he’s also a being forged of, and designed to inflict, suffering. He’s at peace with himself in that regard; pain and compassion are the same thing to him.

Contrast that with Zhora, who’s had enough of death, and just wants to have a life, with the scraps of sex and beauty she can gather to herself before she dies. Good job on that one, Deckard. Feeling bad about “Shooting a woman in the back” is cutting yourself rather a lot of slack.

For whatever value of “him” you want here. Given that Eldon’s mostly excuses about why he can’t give Roy more life and why he’s good like he is, I think he’s mostly explaining to himself, which, for a man of power like him, usually gets him what he wants.

More accurately, Eldon tries to patronize Roy into accepting his own death as both moral and necessary. I get the idea that Roy wants Tyrell to give him a reason to not kill his father (per Final Cut) / fucker(per Director’s Cut). But no reason is forthcoming. Roy finds Eldon’s explanations petty and trite, formed of the kind of compromise one can make when the consequences of that compromise are borne by others. The sun god in his pyramid can make life, but can’t answer the questions that the life demands when it walks up to your bed in the middle of the night and wants to talk about ethyl methanesulfonate as an alkylating agent.

Is Roy in the moral right?

Roy is a violent person, built for violent purposes. And yet, he loves Zhora and Pris and, even though Leon is clearly an idiot and Zhora seems to have abandoned them, he never considers harming any of his companions. His violence is constrained and purposeful. He wants those who have visited a life of suffering on his kind to feel the same  suffering that they casually inflict, to relieve them of the belief that they are untouched by the consequences of their actions. Roy even apologizes to Sebastian as he kills him — he knows that, while Sebastian has done a great evil, he intended no evil.

Hey, do you like thoughtful science fiction? It takes a lot of hours to write things like this. Please help me by backing my Patreon.

The other one is the moment it says STAR WARS.

I have a great deal of sympathy for slaves who turn on their masters: Leia strangling Jabba with her chains is one of the two moments in Star Wars that brings tears to my eyes.


Do you love Roy the way I do? I made you this shirt, then!

I don’t think so, and cui bono in such a construction? Is it more wrong to allow the brutality to continue, inflicted on others less brave or able?But if it’s wrong to brutalize people in order to enslave them, is it equally wrong to turn that brutalization around? Does that make the (now ex-)slave as bad as the master?

Instead, if a person deprives another person of agency, the master must know that the goal of total deprivation is impossible; rather, they have narrowed all of their slave’s avenues of agency down to those that run through and over the master’s corpse.

So, is Roy’s brutal murder, destroying his father/fucker to the very soul, evil? Sure. Of course. But it’s evil that stems from Eldon’s every moral decision, which he makes with impunity and with the force of vast resources. Roy accepts that evil, since his very existence is an expression of it. But at this moment, it’s evil that is seeking — and finding — its own end.

On the rooftop with Deckard, Roy has lost his companions, his creators, and his life. All he can do is try to explain to a fellow slave — now marked in mirror on their hands, making them blood brothers — that he experienced his life as a person, in stark defiance of institutions with powers of life and death, and to take pride that, for a moment, he brought justice.

PS: See you next month!

42 thoughts on “The Question Is Not Whether Deckard Is A Replicant, But Whether Roy Is A Person”