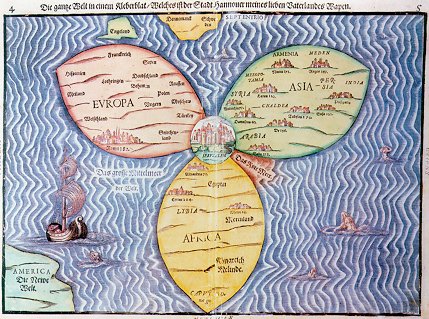 In Xenon: the world is made of a map that’s created by the World Player as the travelers leave their home behind. Technically, the map is a relationship map with broad categories. The Xumph prey on the Canwana. The Canwana raise the Xumph for ritual sacrifices. The Canwana trade Kogantaw wax with the Feihun, who return to them Choum that they steal from Yikl merchants on the Siaia Way. The Canwana are at war with the Treloudon and their kings Protu, Behun, and Goksh over the idol of Great Nadwhu, the primordial Xumph.

Now, what’s neat about that is that you wind up with a physical map of the world in the process. Just writing down a people on the map gives them not only their relationships to others, but also where they are in the world, how far you have to travel from a place to get to them.

Consider the map at the top of this post. It’s a Renaissance European map of the world. Note that the cartographer is under the impression that Europe is as big as Asia and Africa. He’s drawing it from his perspective. It’s not literal, and the guy knows that you couldn’t navigate by it, because the real world is much more complex than all that (never mind not knowing about three whole continents and only knowing the tiniest amount about one, which is shown as an amorphous mystery at the edge of the world-ocean), but it conveys what you need to know.

I’d like to see a lot of map making in Xenon: and will probably take a page from The Dragon Killer in that regard.