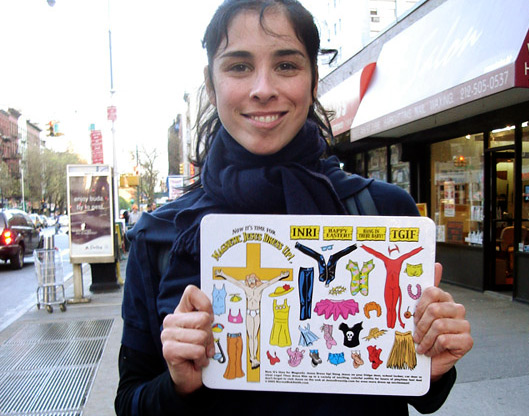 So, you know how Palin keeps talking about how they can’t let another Holocaust happen? It’s not out of respect for the humanity and distinction of the Jewish people. It’s just so we can die in the rapture.

Well, OK, that, and making the relentlessly Left-Wing, Progressive, pro-civilization and Democratic Jewish population of America waver in their support for the best Democratic Presidential candidate in my lifetime.

In August, just eight weeks ago, Governor Sarah Palin sat in her church, the Wasilla Bible Church, and listened to their honored guest, David Brickner, describe how the challenges Jews face in Israel is a result of their having rejected Jesus as their personal lord and savior. The talk was entitled, “The Jerusalem Dilemma.” That’s code for “The Jewish Question“.

If Jews have anything to fear from the upcoming election, it’s not that Barack Obama might be a Muslim (he’s not). It’s not that he’s black (that’s good). It’s that John McCain selected someone who believes that we should be converted en masse by being lied to. If you are, or know, Jews in Ohio, Florida, or any other swing state, make sure they know this. There’s been some ugly racism showing in polls of Jews, and it needs to be made clear which side the bread is buttered on.