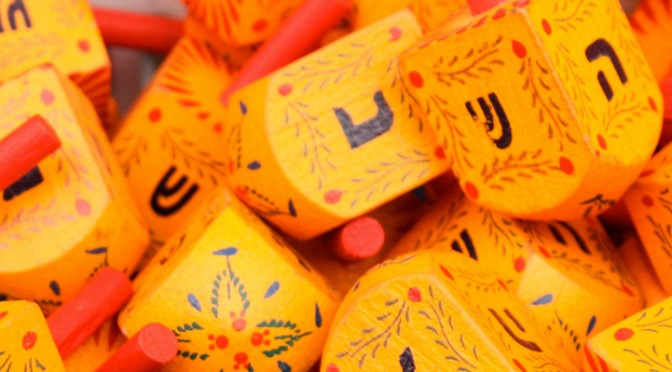 Dreidel is an awful game. Every Jewish game designer knows  that they’re doomed, come the 25th of Kislev, to bite our tongues or be branded the enemy of fun — fun that, for some reason, the adults all decline to participate in.

Chanukah has amazing themes. It’s about the fallout from Alexander the Great’s attempt at a world empire. It’s about an ethnic minority fighting both assimilationist social forces within its own society and military forces from without. It’s about a bronze age civilization reaching into its next phase. Also, it’s about a miracle, though the pshat and drash on what that miracle is (and, therefore, what any miracle is) disagree wildly.

We light lights on these dark days for the same reasons so many cultures do: because it’s so dark. We need to see the light of each other to reassure ourselves that the sun will, in fact, come back. To give us an opportunity for joy and hope, even in the winters of our lives, of the life of our people, and of the lives of all peoples as they face the brutality of hegemony.

To celebrate that, we light the candles of the chanukiah, under which we do absolutely no work. We eat candy, we drink tea and coffee and wine, we talk, and we play a dismal little game that, at best, everyone gives up on before one cousin gets all the candy.

Jewish game designers, let’s get on this!
What if you’re not Jewish? If you’re not confident of your grasp on the halachah and minhagim regarding the chagim and Chanukah in particular, please sit this one out and watch how it goes. If you must participate, please do so in the traditional mode of asking an open question, expecting a question in return, including when the answer looks like a definitive statement.

1st Prize: In retrospect, centuries from now, this will be how everyone has always played Dreidel! It will be an obvious minhag that every child learns.

2nd Prize: In retrospect, centuries from now, this will be how everyone has always played Dreidel, but everyone knows that lots of people play it wrong.

Post your games in the comments here, either by pasting in the whole rule text or with a link to a download site. Share with us your reasoning along the way, of course! This is as much a Jewish cultural discussion as a game design discussion!

17 thoughts on “The Dreidel Reconstruction Project”