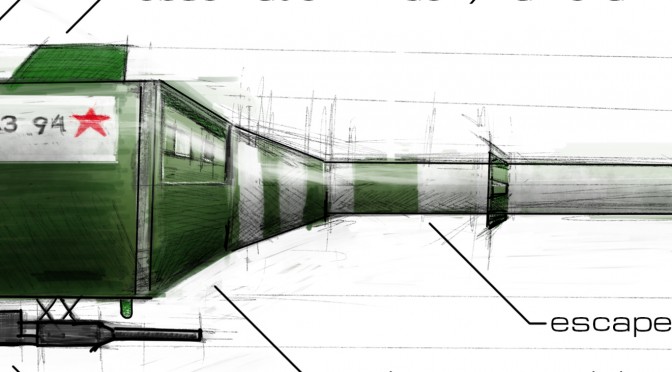 The Soviet Almaz space station system is an adaptable set of orbit-assemblable parts that forms the basis of the Soviet Space Force of 1979. For the last several years, hundreds have been constructed and launched from Star City, most as spy satellites and platforms from which to drop their crewed nuclear bombs.

While the American design philosophy of such stations has been to assemble large stations with many capabilities, the Soviet philosophy has led to a large number of craft like the Almaz that can keep its crew of two alive for weeks at a time, replenishing resources from orbital depots.

This Almaz is nearly the smallest practical configuration, capable of sustaining a crew of two for a month, firing its 30mm cannon up to 64 times at enemy spacecraft, then replenishing its resources or returning its crew to Earth safely with its descent module. In this configuration, it presents a stable firing platform for interception missions, as well as an orbital spotting platform.

In addition to the hundreds in Earth orbit, several are now in use in Lunar orbit, with its characteristic descent module replaced by a lunar descent module. Further Almaz-derived designs are carried by both translunar craft and on the two massive TMK craft en route to Mars.

When faced with Nixon’s dilemma of whom to use to crew so many anonymous, secret craft, Khruschev wound up making an offer that the Kuban Cossacks couldn’t refuse. Cossack women now fill the ranks of the interceptor crews, their families held under the protection of commissars in specially constructed, secret villages.