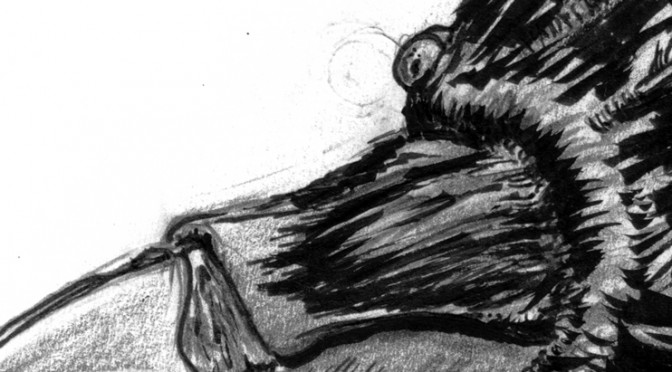 Corvosapiens (or, as they call themselves, “people”) have a rich and varied physical culture. However, because of their greater mobility than earthbound humans, aesthetic principles and philosophical structures often spread more quickly than they did when primates were the custodians of the civilization meme.

Body ornamentation, restricted as it is by the physical requirements of flight, typically takes the form of feathers from birds raised and bred for the purpose. Merchants and migratory flocks trade takes place between regions where different livestock live, and many subcultures take pride in either their particular local specialties or a cosmopolitan array gained through trade or occasional plunder.

However, the most quickly-propagating medium of information is the spindle-recorded satirical allegory. Many flocks consider themselves the originator of the form, but because ideas spread so quickly among Corvosapiens, archaeologists and historians find themselves perplexed by the apparently simultaneous, continent-wide appearance of writing several thousand years ago, all in the same form of strings of complex braids and knots with only subtle regional variations.

While the first writing strings were kept dangling from a thick yarn and easily tangled, the book has evolved into the form of a set of spools attached to a spindle of ten or so centimeters in length. Each spool holds a single verse, so the longer the verse is, the greater the diameter of the spool. Traditionally, each verse is written so that a reader can finish reading it before rising. If one is distracted while reading, tradition and etiquette require one to rewind the verse back onto the spool, leaving a bead on the loose end to mark where one is in the text, and that the reader will begin the verse from the beginning. Popular sayings, like, “Don’t leave a verse in a tangle” (meaning to not abandon a project worse than having not done it at all) and “Follow a thread to the end” (meaning to not interrupt a line of thought before understanding it) come from the etiquette of never leaving a verse unspooled.

However, modern, mass-produced books often feature a spring-loaded catch and a clip attached to the spindle that allows a reader to mark their place in a verse, then tug on the string to rewind the spool automatically. This has caused a stir among purists in literary circles who point out that traditional texts were written with the form in mind, giving the reader sufficient time to meditate on the verse while they rewound it, and requiring the reader to set aside time to read at least one verse at a sitting. Nonetheless, the modern form has become far more popular among bookspinners in recent years, and since no one wants to read a book that can’t rewind itself, the objections have either been spun onto books no one reads, or are ironically published on self-rewinding spools. Naturally, this irony is a subject of several recent satirical allegories.

The physical form of the writing means that one can read in the dark, pulling the thread through the tongue, though ideas are often formatted with color so as to be seen and felt simultaneously, applying a tone to the work and granting a nonlinearity to texts. To wit, the popular saying, “They read in the dark” implies that the object of derision thinks they know more than they do, but have missed critical contextual or connotative points of an idea.

Libraries consist of racks that hold books densely, categorized by a complex network of influences and references, memorized by a staff of librarians. Due to the structure of the Corvosapien brain — capable of recognizing, memorizing, and modifying of three-dimensional abstracts more easily than the human brain ever was — librarians learn to build the “memory web” that makes them so valuable to their society.

My super-supportive Patreon patrons made this post possible, especially Jason Godesky, who’s sponsoring xenoglyph in the name of his upcoming RPG, Fifth World, about optimistic human reëmergence 400 years after the collapse of Capitalism and civilization. I don’t have a banner for him yet, but suffice to say that it’s my favorite speculative fiction RPG.