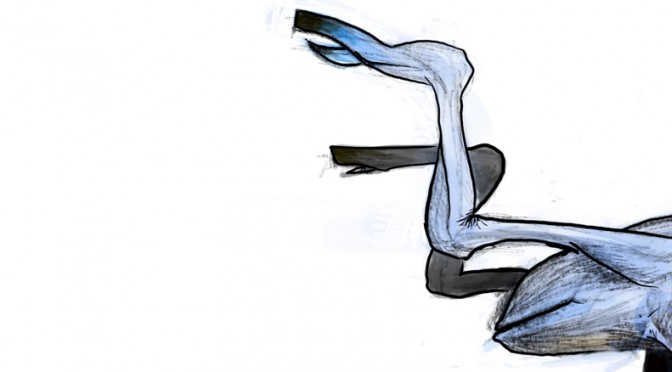 We stand now at an amazing moment in the history of our people. Just a 18 herds of migrations ago, our people were unable to build meaning with our hands, for we had neither the digits, nor the consciousness, to build. But here, now, all herds of the Southern Steppe share those genes, and the herds of the Northwest are adapting as well, with genes gained from when our migrations meet during rut. Those hatchlings without these genes, fail and die before reaching personhood; or, reaching personhood, fail to find carriers for their eggs. Just one herd of migrations ago, we would have left them to die of exposure, or be consumed by our old threat, the cleavers.

Thanks to xenophiliac Dave Michalak for the initial inspiration for these sophonts.
But the cleavers are no more. Once the people recognized the use of weapons and tools, their numbers diminished. Explorer-herds have found groups far to the north, diminished with hunger and living off smaller, easier prey.

Now we offer those who fail to reach personhood the solace of a comfortable life, ended humanely at the time of their choosing. Each breeding session fewer and fewer such individuals hatch. The delight we take in hand-knowledge takes copulatory form, and those who do not gesture neither find egg-givers, nor will any accept their eggs.

And now, with the echoes of such changes still resonating in our language (have you noticed that our word for 18^3 looks just like our word “herd”? We are bound by our biology in our thought!), we look skyward, at the sparkling lights on our moons, where our offspring-herds explore there, sending us back hand-knowledge. Our telescope arrays traveling with them, unburdened by the thick wash of atmosphere that clouds our vision here, even on the clearest night on the Steppe, show us a vast universe upon which we can graze. (Another word! Have you noticed that, when we say “graze”, it means both gaining herd-knowledge of a place and the act of ingestion?)

The Eighteen Cloud Dance Herd now take this bold step into the desert of the horizon. They will leave the Moon of Rivers, prepared for migration through the desert of vacuum, for the planet we knew until only recently as a speck among the stars, the Star Which Moves. Eighteen Cloud Dance Herd has made great sacrifice. Their herd-knowledge they pass to us only as hand-knowledge as they migrate through the openness. The migratory cycle will take half an 18 of years if all goes well for them, during which they will be unable to pass an egg through to hatching, so they use the techniques and tools developed by our polar explorers: artificial eggs that they might pass that they might continue the intimacy required of fellow herd members. They use a chemical also developed for polar exploration that makes eggs nonviable. As in the natural cycle, they will be able to use the material of these eggs to fertilize the orange crawlers that they have brought along for food. Only to replace lost herd members will they reproduce.

Let us raise our hands to them this beautiful night as they expand our migratory reach ever further across the deserts of the sky!

2 thoughts on “A Thoughtful Herd”