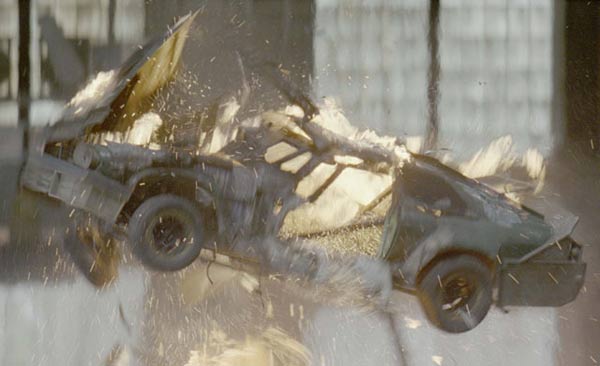 Got together tonight with Rob Bohl, Emily Care-Boss, and Epidiah Ravichol for a first round playtest of Burning Rubber. We weren’t shooting at each other. I wanted to see if the driving game was fun, and when, if ever, you’d wish you could shoot. Each of them gave really solid feedback. Thanks, guys!

The big things we noticed:

The following rules supercede the previous post on the matter. They are much simpler. My sacred cow of “facings” is by the side of the road, trying to hitch a ride to a different game.

(We played with only Yellows and Greens to test the driving rules, but we played with 3 of each, and it was too many. If you want to do so, making it a straight up racing game with lots of contact and crashes, I suggest you play with four dice, any two of which can be swapped for a d8, one dot of armor, and two Whites.)

I was wishy-washy about it before. Sorry. It turns out scale is really important. Now there are standards.

This obviously requires an example:

I measure the direction of the skid from the last turn, turn the car to that 2-click position, and slide it 4, the remainder of the way to my vector marker.

Crashing into other cars

The difference between Green and Yellow

The problem with fighting racing games is that it sucks to be in first place because everyone shoots you and then you die, and then someone else takes first, and then they die, so the smart people don’t even hit the accelerator until turn 2. It also sucks to be behind because shooting that guy doesn’t actually let you crawl your way up. It’s supposed to be a race. Being in front should have advantages, and shooting should help you claw your way forward. Here’s how I’m thinking about it.

If you’re in front, you probably have some room around you to maneuver. When someone shoots at you, you can jink — drive crazy to be harder to hit. Every click you jink removes one hit (and you have to do them all in the same direction). It also puts you out of line with your vector marker. So you’re skidding! What that means is that it’s hard to hold on to the front position because you’re going to be taking turns sloppily, but it’s still worth the risk, cuz that way you can win. You can, of course, take the hits, as well, like when you’re in a bad position for the curve anyway. You get to weigh your options.

This, along with skidding and crashing, is what’s making this game work for me and what might just set it apart from others of its kind.

How to Be On Fire

Roll the number of Greens you’ve lost, plus another one for every Green d8 you’ve lost whenever you:

Additionally, if you touch stuff that’s on fire, at the end of your movement, roll a die for every on-fire thing you roll over.

Every 6 you roll costs you a die, and is now a fire die! You’ll have to roll those next turn unless: