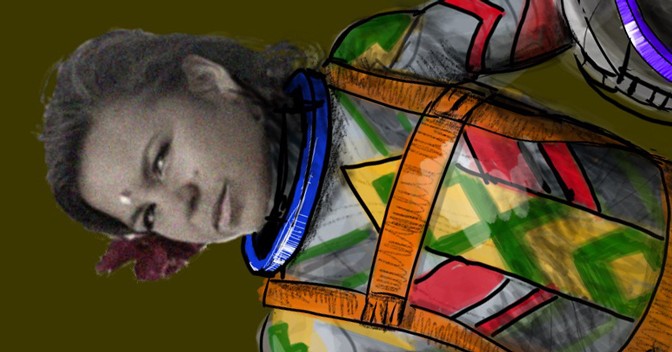 We’ve seen Radish Saumet’s spacecraft, Happy Delivery, before! Her spacecraft doesn’t have much of an aesthetic (except for the spraypainted Jolly Roger on the side) because it’s so modular; Radish swaps parts as needed, keeping the ISp and thrust as high as she can afford.

Her spacesuit, on the other hand, is another matter. Over time, she’s swapped dozens of parts in and out to match her tiny frame and her habits. Barring repairs, though, it’s remained the way it is for the last couple of years.

The helmet fits the common collar standard that most suits use (barring the official Conference standard, which isn’t even used by Conference citizens once they have to deal with the practicalities of space). It’s a simple, locking aluminum ring that can fit almost any helmet. Her favorite helmet leaves her a clear field of view, has room for the bill of the work cap that keeps her hair out of her face, and has a really handy system of sun shields made of gecko fabric that she can adjust as she needs. Its lights shine from the sides, the way she likes, and when she hits her head on something, she’s found that the ancillary parts take the hit, rather than the pressure helmet itself.

The suit itself is a common “biosuit”, which holds the body at around 8psi through dynamic elastic tension, rather than with air pressure. To keep the pressure uniform across her body (and thereby prevent serious negative pressure hematomæ), the suit fills the inside curve of her armpits and other parts of her body with auto-stiffening fibers. As she works, she sweats directly through the suit into space, though it also has an air conditioning system for her face and to keep the pressure helmet free of fog.

The suit is woven with carbon fiber that absorbs radiation, but if she expects to work outside for an extended period, she’ll put on a radiation and micrometeoroid jumpsuit to reduce her risk of exposure.

Her backpack includes an electrolytic rebreather with a battery, auxiliary oxygen tank with ten to fifteen minutes of air in it, drinking water, and a radiator that keeps the rebreathing system within operating temperatures. The backpack itself is covered in solar panels that augment the battery power, giving her about 10% more outside time.

The backpack is held to her with a harness that includes several connectors that allow her to connect to an umbilicus. Originally it was a Martian climbing harness, but she likes the fit and it allows her to keep equipment at hand, attached by carabiner.

Like anyone who works outside in the belt, Radish has patterned her suit in a distinctive way so others who see her can recognize her from a distance. In this case, she’s chosen the colors of her great grandfather’s Bolivian flag.